I’m blessed and cursed to have my brain. I learn quickly, so I get bored very easily. I’m a skilled organizer and rarely lose anything, but I break out in hives around clutter. I’m an over-achiever, so I always have a running list of no less than 20 goals I want to accomplish. All good, but all very exhausting.

So when I read about the opportunity to be part of the Victory Rituals beta group – a program designed to help participants focus on and achieve one of their goals – I eagerly signed up. With so many items on my “to accomplish” list, I was overwhelmed and ineffective. I’d focus on one goal for a week or so, then divert my attention to another, ending up with a bunch of big and small half-baked projects. Not very motivating or fulfilling.

The beta
Led by Nicole D’Alonzo of TASTEdaily (if you haven’t checked out this site, do it. Like now.), the beta has consisted of two 30- to 45-minute video workshops to date. The first focused on optimizing your morning routine so you can practice those Victory Rituals that will get you to your goal(s). Nicole offered up tips on identifying your long-term goal, then establishing your daily trifecta – those three things you want to accomplish for the day.

The second workshop focused on getting enough sleep so you can be truly productive, as well as the benefits of rituals. By becoming habits, rituals open up space in our minds so we can focus on the bigger picture. And as we work toward the big picture, we get that motivation and fulfillment those day-to-day tasks just don’t deliver.

So here’s what I did and didn’t do
I decided to focus in on exercising consistently, preparing healthy meals and fitting in time for relaxation as part of a larger goal to become healthier physically and mentally. The first few days after the workshop #1, I was gung ho, setting and accomplishing my trifecta each day. Then I lost steam. My overachieving side was fighting back.

“What about writing that book? When are you going to that?” It taunted.

“And how are you going to get that Project Management Professional certification if you’re busy exercising and relaxing. Seriously, relaxing? You have too much to accomplish to do that!”

But rather than give in, I got out a sheet of paper and wrote down all the goals whirling around in my head. Then I ordered them, with 1 being the most important. And I made a deal with myself. I wouldn’t even think about #2 until I did something that day to work toward #1. And #3 would be but a shadow in the back of my mind until I did something to get me closer to #2 that day. And so on.

By prioritizing my goals, I gave myself the mental room I needed to work – or not work – toward them each day and make actual headway.

The results: I’m down seven pounds, physically stronger and less anxious, and I can finally prepare a healthy dinner for myself without setting off the fire alarms. Success!

While I’m still not a morning person (sigh), Victory Rituals did set me in the right direction toward achieving my goals.

Interested in creating and working toward your own Victory Rituals? Get on the waitlist for the program’s official launch. 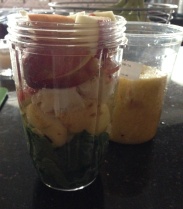 The Toxic Cleansing NutriBlast – before

Last week, I mourned celebrated my 34th birthday with friends and my husband, B, who completely spoiled me. Among my birthday bounty was a NutriBullet. B had noticed me dragging out the blender every morning to mix up my smoothies and thought this smaller blender would be easier to use and clean.

As I read up on this amazing contraption, I quickly realized it’s much more than a blender. This mighty little mixer breaks down nuts, fruits and veggies, extracting vital nutrients. The NutriBullet folks recommend replacing one meal with a NutriBlast (what NutriBullet calls its concoctions), then having another later in the day. That’s a lot of fruit and veggies, so I decided to start with one per day and go from there.

I took it for its first spin (pun intended) this weekend, starting with the Toxic Cleansing NutriBlast. I loaded the six servings of fruit and veggies – a mix of spinach, pear, apple, pineapple, banana and water – into the cup NutriBullet provides, attached the blade top, flipped it upside down set it into the power base, watching as it turned the fruit chunks and leaves into a thick, green frothy smoothie.

One it was done doing its magic, I took a closer look at bright green blend, which smelled faintly of spinach. Not exactly my usual delicious almond milk, coconut yogurt, banana smoothie. But I took a sip and tasted pears, apples and a bit of pineapple.

What I like
After finishing the two-cup mixture, I was surprisingly full. In fact, I had to take a break halfway through to let it settle in my stomach before continuing on.

Five hours and a 30-minute power walk later, I started feeling a little hungry. Not bad! My typical smoothies hold me over for three, four hours tops.

Today, I whipped up the Energy Elixir Smoothie, which consists of mixed greens, pear, red grapes, walnuts, apple and banana. While I didn’t experience a noticeable jolt, I spent the rest of the afternoon doing a Pure Barre workout, putting away laundry, dusting the blinds, crafting and blogging. So it seems it gave me steady, sustained pep.

What I don’t like
My only issue with the NutriBullet? All those organic fruits and veggies add up at the grocery store checkout. Buying enough for five to six NutriBlasts set me back about $70. Next week, I’m going to check out some local farm stands, where produce tends to be cheaper, to see what I can find.

In the meantime, if you’ve used the NutriBullet, let me know what you think. Which are your favorite recipes? 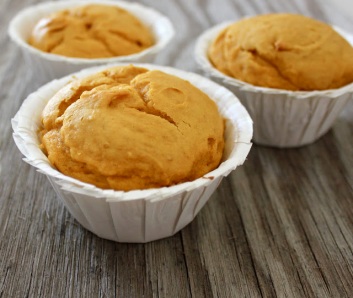 Happy Easter, everyone! I hope you had as great a day as I did. With my mom out of commission, due to a nasty fall this winter that left her with a torn rotator cuff, the husband and I brought some brunch fixin’s to my parents’ house and whipped up (okay, he whipped up – I’m a horrible cook) a delicious brunch.

The star of the meal? The pumpkin muffins I baked this morning (I can bake). I don’t typically share recipes, but given how easy to make and low-cal they are, I couldn’t resist. But first, I must thank Katy of Sweet Verbena for sharing it on her blog.

To make these muffins, you need only half an hour and two ingredients: a box of cake mix – I used french vanilla – and one 15-ounce can of pumpkin. The results are delicious muffins with a moist, cake-like consistency and a hint of pumpkin flavor. And because they are egg-, butter- and everything else fattening-free, there’s no guilt (if you’re a Weight Watchers points counter, they are only two points each if you make 18 from the batter).

One watch-out: The recipe says to bake them for 20 to 25 minutes; however, I found I had to put them back into the oven for an extra 10 minutes to bake them through. Plan for 30 or 35 minutes instead, and keep a close eye on them.

Give them a try and let me know what you think! 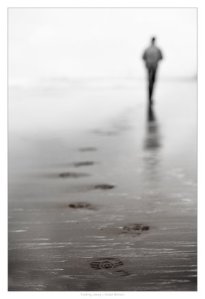 Last month, Energy Project CEO and Founder Tony Schwartz appeared on seemingly every news station after publishing his article, “Relax! You’ll be more productive” in the Opinion section of the New York Times. His hypothesis: we can’t work like computers, quickly, for long periods of time, juggling multiple functions, and still be effective and engaged. Instead, we’re most productive when we alternate between expending and renewing four types of energy: physical, emotional, mental and spiritual.

So rather than try to squeeze all the work out of us that they can, employers should be striving to meet our four areas of need so that we are inspired, focused and, ultimately, producing better-quality work.

As someone who experiences the former on a day-to-day basis, I liked what I was hearing.

I visited the Energy Project website to learn more and decided to take the energy audit – a 20-question assessment that helps determine how effectively you’re managing your four sources of energy.

Survey says? I’m 30 percent energized (a.k.a. burned out). My four types of energy are all “fading.” As a former straight-A student, this did not bode well with me. I’ve flunked… in life?

The assessment includes suggestions for re-energizing my life, recommending I start at the physical level, which is the “foundation for the other dimensions of energy, and where it is easiest to make concrete changes.”

I’ve increased my workouts, and, unsurprisingly, they’ve helped lift my energy levels and keep stress and anxiety at bay.

But they haven’t magically changed my workplace.

Luckily, I currently happen to be reading Sheryl Sandberg’s Lean In, another written work generating major conversations. Sandberg discusses setting limits in her book, telling the story of a colleague who once told her that her boss “would never stop making demands on our time, so it was up to us to decide what we were willing to do. It was our responsibility to draw the line.”

Later, she says, “…long-term success at work often depends on not trying to meet every demand placed on us. The best way to make room for both life and career is to make choices deliberately – to set limits and stick to them.”

As a person of extremes, setting limits and achieving balance have never been a natural strength for me.

But now, after seeing how my extremes are affecting my energy levels, health, performance – my overall life – and understanding that limits are necessary, rather than an admission of incompetence, I’m going to attempt to pull back a bit and take the time to replenish my energies.

What about you? How do you set limits and re-energize? 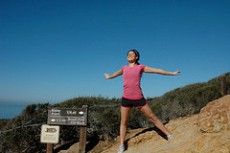 Miracle diet? Lipo? Nope! I haven’t really lost 50 pounds since January 1 (obviously), but I feel like it’s been lifted from my shoulders.

I’ve been exercising regularly, doing a mix of yoga, power walking and elliptical workouts, and keeping track of everything that goes into my mouth. I’ve been eating smaller portions and cleaner. And I’ve temporarily said goodbye to chocolate, because it’s my worst “trigger” food, often leading to more unhealthy eating.

Taking care of myself feels amazing. I feel physically lighter and, more so, mentally lighter. I’m not battling guilt for failing to go to the gym. I’m not spending time thinking about what I ate that day because I’m writing it down. And I’m not beating myself up for eating unhealthy foods, because, well, I’m not.

It’s amazing how much emotional energy and time I spend feeling bad when I’m not caring for myself. No wonder I was always tired! I knew that as I began my journey to get healthier, I’d discover a bunch of additional benefits. This one just may be the best.

What do you want to read?